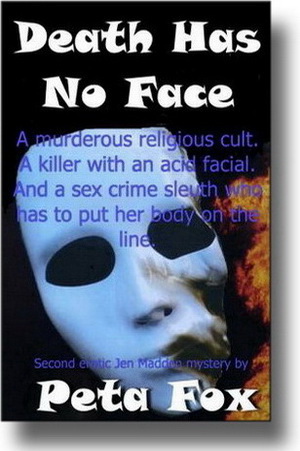 When you're almost flattened by a falling naked spunk its hard to ignore it. And when you're told his killer is the guru of a cult, you're definitely involved...

Jen Madden is a bisexual advertising copywriter who enjoys BDSM and specializes in solving sex crimes. But when the body falls, she doesn't want to know. Until she's hired by a female tycoon to investigate the bedmate of the cult leader's beautiful lesbian sister.
Jen joins the cult to search for a killer with an unusual tattoo - something that will involve her in much kinky activity to locate. And, of course, she falls for the stunning sister. As she strips down for the task, more corpses pile up and she's next in line for an acid facial.
If you like your female detective ultra-cynical, Jen will knock your socks off. This one presses every button. (73,000 words)

Read the start of Death Has No Face here: (Sections deleted to protect the innocent.)

The next week is unadulterated shit. After hurting our heads all weekend to come up with the Great Concept, the presentation is put off till the following Friday! Proving that if you dumped the agency's Account Execs in a baked bean factory, they still couldn't organize a fart.
Tanya and I are ropable. We've rissoled our weekend for zilch. So we do an all-arvo Monday lunch and get seriously sloshed. I'm extra ticked off because, on Tuesday, John goes overseas.
But, at least, that night he screws me silly.
He has a beautiful body - right down to the washboard abs.
***** ***** ****** ***** ***, I say, 'Thank you for having me.'
'A pleasure.'
'So can you tell me where you're going this time?'
'I can. But then I'll have to kill you.'
It's no joke. My fault for developing round heels with a spook. At three AM he surfaces again. This time he's rougher, more urgent. A male should be male. I want tenderness or pain from a woman but vigour from a man.  According to a book I once  read - some naff Indian porn - *** *** ****** ****** **** ******. Its a phrase that kind of sticks in the mind.
We're at it again before sun-up - ***** *** * *** ********* * ****** * * ********** * **** * *** *** ** *** **** ** **** ** * *** * * *   ************ * * ********** **** ** ***** ******* ******. Jen. Her mark.
He ****** and says. 'You're fantastic.'
'Petal-like innocent me?' Well comedy's the new tragedy.
'Come off it. You terrified me from the moment I first met you.'
'That's the sweetest thing you've ever said.'
That morning, I drive him to Mascot. Not to the international terminal. To the private one on the road to the long-term car park. There's a private twin-jet parked beyond the windows. Four hard-chargers are watching its crew load long cases into the hold.
I never know what his mission is or how long it will take. But I know I'm going to miss him - and that there's also a chance he won't make it.
We kiss a lot in the small lounge.
He waves back twice as he walks to the plane.
I blubber all the way to the car.
On Wednesday, I'm sitting in the Creative Department conference room, screening OS confectionary spots when my brain barbecue goes apeshit. I clap it to my ear and hear the breathy voice of Bobo, the fretting female facsimile. She says, 'Tanya gave me your number. I hope you don't mind me calling you?'
I so don't need this. But as I'm an extremely patient person for about forty-five seconds, I dredge up false cheer. 'Hi! What's up?'
'I went to the Institute. And confronted him. Brian Burr.'
'You did WHAT?'
'But, as it turns out, he couldn't have done it.'
'I roll my eyes at the strip lights. 'How do you figure that?'
'He said he'd never met Jimmy, knows nothing about him and was in a meeting with his followers at the time it happened. He showed me his schedule. He says he has a hundred and fifty witnesses. So I'm back where I started.'
I'm now sure I'm dealing with a fuck-wit. I say, 'Hon, rich pricks don't do their own dirty work. They hire professionals for that.'
'Oh!' A long pause. Like she's dropped off the twig.
'You there?'
'Yes, I'm here.' She doesn't sound too sure. 'Well- that's it then. I seem to have come to a dead end.'
'Or it's coming to you!'
Desperate breathing as if I've freaked her. 'Could we meet? Please? Please? I have to talk to someone. Please?'
'I've told you what to do. Tell it to the fuzz. Either that or get some camo greens and a one way ticket to the Congo.'
She starts to sob.
I don't like this conversation because the phone call could be tapped. John's taught me to assume that all e-mails, calls and messages are recorded.
'Please help me.' She's crying.
'Sorry. Can't discuss this stuff on the phone.'
'Then could we have a coffee or something? I'm just a block away.'
And because she sounds ready to top herself and because she knows the local coffee shop and because I like the mad spaz, I say I'll see her in five. Seeing I'm a sucker for dumb animals and can use a coffee, anyway.
I go to the toot and flash my vertical smile at the porcelain, wash the handipands, then check the foxy sprite in the mirror. Great arse, boobs, skin, five foot two and hot. It's the propitious package I come in. Hair, lips, teeth all in the right places. Love you, doll.
The cafe is a hole in the wall with just two tables on the pavement outside. As I walk toward it up the hill, I see a slim man with long hair in a pigtail crossing at the lights. He has a girlish face, wears red work gear and looks like a delivery man. It's Bobo.
She's crossing on the green light but it doesn't make any difference. As she gets in front of the first vehicle -a tip truck - there's the hiss of air. The truck jerks forward, engine roaring and hangs a left.
Oh Jesus!
Its tray bounces around the corner and the double rear wheels mount the curb leaving a squashed thing behind on the road like a heap of dumped clothes.
The waitress rushes from the cafe and shrieks, hands near her face, then turns away.
I'm worst Samaritan known and don't want any part of this. All I want to do is hide in the convenience store. But I hurry up the street, dreading every step.
Her head looks like a water melon that's been hit by a high-velocity bullet.
A wheel has gone right over it.
My breakfast decorates the pavement.

Death Has No Face is the second in the series. Dark humour, clever plot and all the sexual kinks you can handle! Read reviews of the three books here: