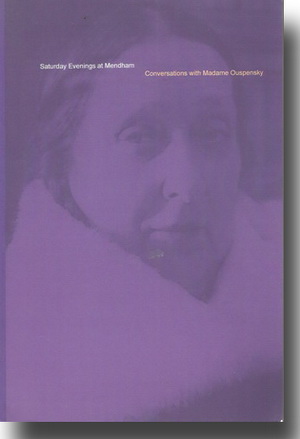 
This book provides entirely new source material for the Gurdjieff Work. It is an authentic transcription of talks given by Madame Ouspensky to her group at Mendham, distilled from notes taken by her pupils at the time.

Students of Gurdjieff's Fourth Way know little about Madame Ouspensky's thought or teaching because she left no written body of work—although some of her sayings were recalled by Robert de Ropp in his short account of his time with her. That has been virtually the only material extant. Until now.

Now, an authentic transcription of talks given by Madame Ouspensky to her group at Mendham is published here by Buzzword. The talks, distilled from pupils notes, have been painstakingly compered and edited by the late Dorothy Darlington who spent years with Madame and Mr Ouspensky and who had a special affinity with Madame.

Dorothy wished this part of Madame's legacy to be preserved. But, despite decades of prompting and submissions, no Gurdjieff Group or Group affiliated press has bothered to take the project forward. So, to preserve this account and to make it finally accessible to those studying Gurdjieff's ideas, we now issue this unique and priceless record as an ebook.

Madame Ouspensky's place in Gurdjieff's System is relatively unknown. Her role was never publicized. People on the periphery were not even aware that her House in the country existed.

Madame and P. D. Ouspensky had both very specific functions in the work. His was to disseminate the Ideas in pure form. Hers was to work with people individually who, as she said, 'already knew what they wanted.'

When she left the Prieuré in 1929, Gurdjieff gave her a MS copy of Beelzebub's Tales with the words, 'Go and help your husband in London.'

For this purpose she organised a House for Work based on the principles laid down at the Prieuré. Here some people could live, others visit.

To show people what they actually were and to fight on the side of the 'eternal against the temporal' was a task that aroused little gratitude in unprepared people or in those who defended and protected their little selves whose very life was threatened. But to those who really wished to see themselves—to see what IS—she gave inestimable help.

I was present at her reunion with Gurdjieff at Mendham in 1948. It was as though they had never been apart. And because I was with her, he gave me some experiences that after the passage of thirty years are still vividly present.

During this, his last visit to U.S., Gurdjieff told Madame Ouspensky: 'I need you to help me in my work for the next ten years.' He himself died the following year but she carried out his wish to her own final illness—just over ten years later.

AN APPRECIATION OF SATURDAY EVENINGS AT MENDHAM

'The book arrived safely today and I thank you so much for sending it. I wish I could describe to you how much it moved me in my innermost parts and how I feel myself under a great obligation.'

Daphne Ripman Matchelajovic More publications on this site relating to the Gurdjieff Work:

The Wisdom of Being

This book takes you far beyond the conventional view of spirituality to reveal the hidden core behind the Gurdjieff Work, Buddhism, Vedanta, Sufism, Christianity, Taoism, Vedanta and Zen...

John Alexandra studied with both the Zen and Gurdjieff traditions and became an expert on comparative religion. His book attempts to de-mythologize approaches to self-awareness and self-transformation and to reveal the inner core of authentic systems of self-mastery.

Gurdjieff and the Arch Preposterous

G. I. Gurdjieff's allegorical masterpiece, All & Everything has attracted many interpretations. This study is unique because it examines it from the autobiographical standpoint.The author believed that Gurdjieff used the Hermetic code in Beelzebub's Tales and demonstrated her theory by applying it as a key to the six 'descent' chapters of that book.

Joy Lonsdale spent much of her life studying the Hermetic Code and corresponding with experts in the field. She attended a Gurdjieff group for years and was later a member of the Rosicrucians.