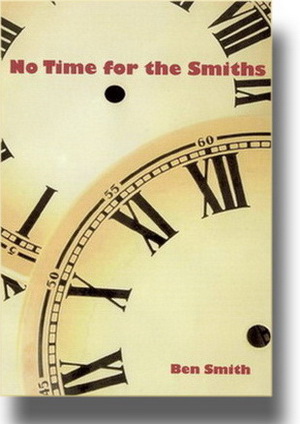 No Time For The Smiths - the hilarious Australian classic about how not to start a marriage.

Australia in the 1950s. When a naive young couple marry, romance clashes with reality and just about everything goes wrong - and, curiously, right.

When a gormless just-married couple rent an impractical shack at Avalon, twenty-six miles from Sydney, they face, among other things, a leaking roof, a parade of aggressive wild life and an endless commute in a broken-down side-valve Morris Minor. Soon they have no time for anything except keeping on the road.
This as-it-happened memoir, constructed from their daily journal, provides a laugh-out-loud chronicle of their disasters and keeps you chuckling to the end. The Smiths has delighted readers everywhere and is available as an eBook or paperback. (59,500 words)

Art-paper paperback hard copies of this book now available for $30 including postage. A great gift. Order below. Then please advise us of your forwarding address at submit@buzzwordbooks.com

Read an incident from The Smiths here:

The gormless couple are so strapped for cash they decide they have to get better jobs or start some money-making scheme. Now read on:

Rina had no formal medical training but she had spent so long in the pharmaceutical field that much had rubbed off. And, one night, sitting on the bus, she glanced at the paper of the man beside her and spotted a small ad for a pharmaceutical rep: 'sound knowledge of medical terminology a must'.
She bought a copy of the paper the moment she reached the shops. Female reps in those days were almost unknown. There were perhaps two she knew in the industry. 'But anyway,' she thought, 'I'll apply. Another iron in the fire. I'll write the application on the weekend.'
The next Sunday afternoon, when weekend house maintenance was over, we had two precious hours of sunshine to ourselves. So we went to the beach with pens, paper, dictionary, clip-boards and my Remington Model Five portable.
On the few occasions we'd made it to the beach, we usually took the office. And to avoid upsetting people who merely came to swim we would retreat to a hollow in the highest dune where we could labour unobserved. Besides, Rina thought I could write.
'You should write, Mia,' she constantly told me. 'You have a real gift that way.'
This I found far-fetched. Yes, I could scribble. But couldn't everybody? So, to justify her hope in me, I tried to write a radio serial - naively having decided that the lowest common denominator wouldn't take much time and might even drag in desperately needed pelf. We were ready to try anything by then.
I raised my Parker 51. Such beginnings, I thought, led on to greatness. 'It's got to be a maiden's madness thing to suck the housewives in. I'll call it Wild Wisdom. How's that?'
'Mmm,' she said, not listening, thinking about her application.
'It needs this slinky, paranoid heroine - all things to all men but useless to herself. Gillian? Solita?'
Rina ground her toes into warm sand and sucked her pencil.'Ben Mia.'
'What?'
'I want your attention for a moment.'
'I've got it. I've got it. Melanie! Isn't that just too stupid for words? Melanie. What a hoot.'
'Ben Mia.'
'Mmm.'
'What should I say in this application?'
'What application is it this time?'
'The thing I saw in the bus. I know they want a man but if we write it the right way...'
'Melanie Strange,' I yelled. 'That's it. Perfect name for a drama queen.'
'Melanie Strange!' She thought it ridiculous too, so that was settled.
I scribbled it down. 'She'll sweep through life...'
'A contract cleaner, is she?'
'...wrecking men and blighting herself. She'll never have a wart or bunion and her hair will always float behind her.'
'Couldn't she have some on her head?'
'And her breath will smell of jasmine.'
'Funny diet. Does she go to the hoo haa like everyone else?'
'No. Her bodily wastes self-combust without any outward display.'
'How painful.'
'And her parents are rich beyond imagining.'
'Well, we know they've already saved a fortune in nappies.'
'She'll have a great quest in life.'
'You mean to sell soap?'
'And sell it she will. Because stark tragedy will confront her behind every sound effect door.'
'She sounds loopier than my mother.'
'That's it! She's your mother. Beautiful. Bewildered. Cursed by fate with compelling, ineffable beauty. And soufflé for brains.'
'Ben Mia?'
'And she loves this elusive man. With a name like Rock, Dirk, Brad, Brett, Chuck...'
'I hate him already.'
'But he's wasted on her.'
'Lord, he must be a sonk.'
'Because he has a heart of teak and the intelligence of a squeegee. Now what does he do for a crust?'
'He sounds too dumb to do anything. Perhaps he could get a job as a speed hump.'
'Or a windbreak.'
'Perhaps he could walk behind her, holding her hair... Ben Mia.'
'What, Rina Mia?'
'I want you to help me with my application. Forget about Melanie for a moment.'
'An aura everyone remembers. A past she can never forget...'
'Here's the ad. See? Look.'
'He came out of the shadows and burned himself into her heart...'
'Read the ad, Mia.'
I read the scrap of paper. 'You need some qualifications. What have you done?'
'Let's see. In my other job I helped the sales manager with a trade paper they put out for doctors.'
I wrote down, 'Assistant editor of medical magazine'.
'You can't put that,' she said. 'I only helped wrap them up.'
'Doesn't matter. You helped. That's the main thing.'
'Oh, and I had to run round town with him, carrying bundles of stuff to the printers. He'd always walk on the inside of the footpath because he said that women should protect men. So I'd complain and change places with him. And then he'd skip across to the inside again. People must have thought he was mad.'
'Did you complain?'
'Of course I did.'
I wrote down, 'Responsible for guiding editorial policy'.

REVIEWS OF NO TIME FOR THE SMITHS:

"A fascinating peek at an innocent time in Australian history."
THE SENIOR

"This is a delightful reminiscence on the beginnings of a marriage, the lack of money and the efforts required to 'keep the show on the road'."
MOSMAN MAGAZINE

Fifty years ago, Sydney, Australia, was a kinder, slower place. No one talked much about ecology. But, in the outer suburbs, you could see koalas in the trees.
Bandicoots still hunted through rubbish bins, black snakes basked on the lawn and kookaburras laughed at sun-up in the morning, two days before it rained.

The sea was clean. Buildings were smaller, cars simpler, freeways unknown. People could still be rapacious but their greed was more gauchely expressed. We were less a part of the world which was considered 'over there'. And world problems were not intrusively ours.
Television had just started in a tiny studio at Gore Hill - black-and-white - often transmitted live.
We had pounds and shillings, inches, yards. We believed in cooking with lots of lovely fat and we were able to travel to England, sedately, restfully, by sea.

The Welfare State hadn't replaced the need to work and young couples getting married found things tough.
Politicians were provisionally considered worthy members of society and morality was an outward necessity. We were still at home on the sheep's back. Magazines were as big as present day tabloids. Labour saving devices were crude... the mechanized ringer and barrel lawnmower.
We felt secure in the arms of our paternalistic leaders and very much the child of mother England.