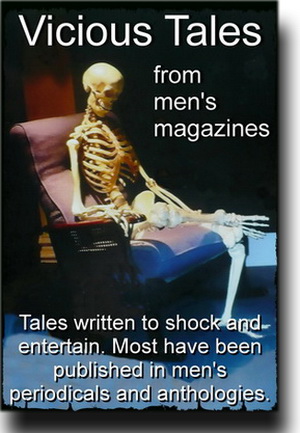 It's all here: horror, crime, mystery and SF.

In Night Flight to Amsterdam, a millionaire's life depends on stealing another man's coat.

In The Round Metal Tomb, a con escapes jail by being welded into a 44-gal drum. It seems the perfect ploy - until he discovers what the drum will be used for.

In So Very Lifelike, the wife of a wealthy taxidermist takes a lover. And learns what it means to stuff things up.

In Kidney Punch, a Mafia boss on dialysis makes the mistake of monstering a nurse.

In Come Down Killer, a gung-ho reporter ends up with a killer on top of an industrial chimney.

Then there's Hot Shot, where who's up who becomes a matter of life and death.

And Split, where we meet a man who is equal to anything - from murder to nuclear war. (23,000 words)

'Grim is the word. A joyful collection for twisted minds and good fun.'
MOVING FINGER REVIEW

"Work of impressive quality. Each story skilfully manipulates language and form to convey the central theme: 'the world behind what we take as reality'. A pleasure and an education to read."
Lynk