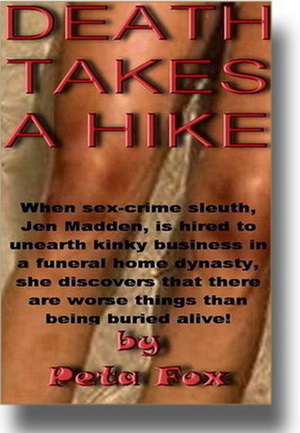 It's unpleasant to trip over someone chopped into three pieces. Particularly if the killer is an embalmer and you end up as his next assignment!

As Jen investigates the megarich dynasty, she discovers a nest of sexual kinks that result in three of the family being shot. The police call it murder/suicide. But Jen finds more. And makes a slip that almost kills her. (70,000 words)

Read the start of Death Takes a Hike here: (Sections deleted to protect the innocent.)

Midnight.
The beach-house is lit up like a cruise ship.
The snooty guests are pissed as farts. I doubt anyone's doing lines because the scene's too straight but a whiff of pot drifts from somewhere.
The worst of the male gropers, a drop-kick with a beer gut, comes onto me.  'Hi, Jen. How're you tracking?'
I flash him a back-off-creep smile. 'Need some air. See ya.'
I waltz my drink onto the terrace. The sea breeze is colder than a backyard dunny. I follow my twinkling party shoes down the rough path that leads to the lookout.
The track, hard to see in this thin moon, winds through the low coastal scrub. I hear breakers smashing against the cliff face and should have reached the railed boardwalk by now so must have strayed off the path - clever bunny me.
I reach a clearing where the house lights on the hill gold-fleck the tops of the bushes and almost walk into the back of a woman wearing a black evening dress.
I know that starved racehorse frame. It's Bev Sheehan - matriarch of the clan.
She sways, hand to throat, half turns and throws up. It does zilch for her aristocratic profile but probably adds nitrates to the soil.
She moans - I don't get why - then stumbles up the slope and out of eyeshot.
And, because she lives here and knows the turf, I do a bunk in the same direction. Until my foot snags something soft and sends me face-first into a mouthful of bush.
I stare back along the ground.
I've tripped on a leg.
A leg bare except for a sock.
A leg minus a body.
Hacked off like a Christmas ham.
I straighten up, gagging, and spot more bits. A man's bloodied head with shocked ping-pong ball eyes and a twisted mouth baring expensively capped teeth.
It's Adam Sheehan - one of the two founding brothers who own Sheehan Funerals - the enormous franchised cash-cow I'm about to spend my life writing ads for.
Beneath his swish sports shirt, his gut ends in a sticky pool. His other leg and the remains of his crutch are two metres further off with the pants still caught around the ankle. Sic transit gloria. Sic with a 'k'.
One thing's sure. He's been fatally killed to death.
It could only have been done with a machete or axe. Or a close encounter with a shark, except we're thirty metres above high water mark. Or a Claymore. Except you could count the landmines in rural Victoria on the stump of one hand.
Besides, whoever did this was after the guy's cods - has hacked his ***** **** so savagely the rest of the chop-fest looks incidental.
'******** hell!
I swallow bile.
I don't want to know.
Wasn't here.
I never saw this.
Ever!

Death Takes a Hike is the third murder mystery in the series. Read reviews of the three books here: