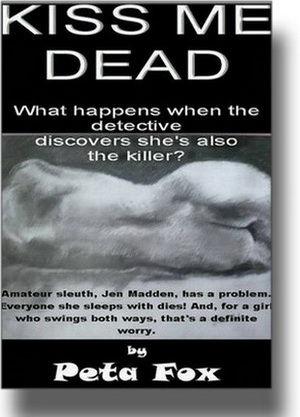 What does a female detective do when she discovers her own body is the murder weapon?
Foxy, sexy, super-sharp. Jen Madden is a blast!

This ingenious mystery novel will baffle you to the end.

Read the start of Kiss Me Dead here: (Sections deleted to protect the innocent.)

It's 10.30 AM and I'm sitting in the agency trying to write the frigging Glamglo commercial when Danny rocks in and perches on my desk as if he designed it. 'So we'll pick you up at eight?'
'And this shindig's on their yacht?'
'Not a yacht, a fifty foot gin bin with two staterooms. You can wear high heels and knickers are optional.' He's an agency suit, so he'll turn on anything to keep the account - special boxes to sporting events, parties with paid sluts and Ice...
'Is this classified as client contact?' I bat my lost doe eyes. 'Then I want more perks. You heard it here.'
'Lighten up.' He flashes infuriating dimples and decamps, leaving the hint of budget-busting aftershave.
I don't like it. Just because I **** him and his squeeze doesn't make me cool about a five-some. I feel used and grab the blower, wanting to sound off to Maxine.
She says, 'Hi, hon. Set for tonight?'
'Dunno. Rather just be with you.'
'Sweetie. You will be.'
I can smell her warm skin now, ***** **** ******** ********** ****** **** 'So why are we doing this? Just to keep the PetPrad account?' PetPrad is the pet food giant - turns orphaned joeys into mince to feed Pekinese. 'And how do we know we won't end up the object of their infections?'
'The client ***************.'
******* ************ ************ ****** ************ ****** ********** **********
I've met the pair at agency dinners. They're South African and loaded. The MD of the agency trots me out as window dressing. It's exploitation. There are two types in agencies, the creatives and the suits. And I'm a creative, not some bloody client-contact drone.
She senses I'm pissed off. 'Anyway they take care of themselves. They're clean. We've never had health issues.'
'So how come I'm the sacrificial lamb?'
'They're your biggest account. It's a war zone, love.'
'Like do we have to ***** *****?'
'One way or the other!'
'Wasn't in the job description.'
'Very droll. Now they'll smoke or be on Meth. But they won't mind you getting smashed on Bolly.'
She knows I'm ticked off by drearies in the agony-of-ecstasy rave scene and can't stand tribute acts that think it's cool to be ill. I was born hyper anyway - need a CNS depressant - so drink the world pretty. Call it ethics if you like.
Then she tells me what she'll wear: the fake brown silk number with the V-neck that shows off her olive skin and sensual body. She says, 'See you tonight. And we'll... share dessert, okay?
I hang up, ***** ********** *****.
Where the hell was I?
I squint back at the laptop - at my vomit-making thirty-second spot for shampoo. I need a cute slogan and I'm bleeding from the brain.
Then Jack Norton, the agency MD shoves his head through the door. 'Hi, Foxy. Good luck for tonight.' He winks obscenely and goes.

That was the kickoff. No glaring revelations there. But I know I'm not seeing something and it won't leave me alone.
I cling to the railing of the boat, face into the wind. We've rounded West Head. The breeze is stronger. I can see the lights of Palm Beach.
So is the clue in something that happened after we shipped on this plastic fantastic?
It nags at me.
I think back to the start of the cruise...

Kiss Me Dead is the first murder mystery in the series. Read reviews of the three books here: